Starting from March 15, 2022, the Institute will present a series of lectures and presentations on the US and transatlantic economic developments.  Most of these lectures and presentations will be open to the public. Some specific items prepared especially for the university community.  The lectures will address major theoretical and practical aspects of the US economy and its development, while the presentations will analyse current developments and provide snapshots of multidisciplinary factors which impact and shape economic events in the Transatlantic region. 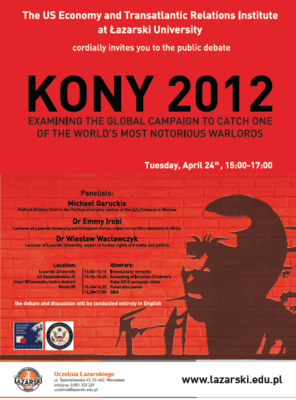 US Economy and Transatlantic Relations Institute hosted a public debate, in English, titled: "KONY 2012: Examining the global campaign to catch one of the world's most notorious warlords".

The debate took place on Tuesday, April 24th between 15:00 and 17:00 in room 58 at Łazarski University. The panelists included:

On April 1st, 2011, the Institute of American Economy and Transatlantic Relations together with the Polish-American Foundation for Economic Research and Education organized a guest lecture by Dr. Samula Gregg under the title: "The Spirit of Capitalism: Why Weber Was Wrong About the Commercial Society". Students of the Lazarski University participated in the lecture on the writings of Max Weber and the perception of the crisis by capitalism in the face of the recent financial crisis.

Dr. Samuel Gregg is director of the expert team at the Acton Institute, located in Grand Rapids, Michigan. He deals, both as a lecturer and journalist, with issues of political economy, history and economy, as well as the problem of ethics in the area of ​​finance and law. He received his MA in Political Philosophy from the University of Melbourne, and a PhD in Moral Philosophy and Political Economy from the University of Oxford, where he studied under Prof. John Finnis. He is the author of a number of books, including his award-winning The Commercial Society (2007), The Modern Papacy (2009), and Wilhelm Röpke's Political Economy (2010). His articles have also been published in numerous scientific journals and newspapers such as The Wall Street Journal Europe, Washington Times, Australian Financial Review, and Business Review Weekly. 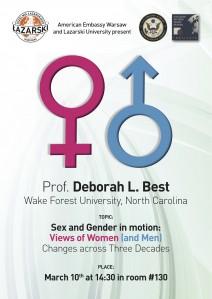 On March 10th, 2011, the Institute of American Economy and Transatlantic Relations together with the US Embassy in Warsaw organized a guest lecture by prof. Deborah Best of Wake Forest University titled: “Sex and Gender in Motion: Views of Women and Men - Three Decades”. Professor Best has in his scientific achievements numerous publications on the problem of male and female stereotypes and the impact they have on the functioning of both genders in modern society. Professor Best is also a co-editor of the Journal of Cross-Cultural Psychology.

The lively discussion allowed students and other visitors to learn about the different approaches to gender in North America, Europe and other parts of the world. In this context, the listeners were able to confront their views and were drawn into the process of assessing their own stereotypes. 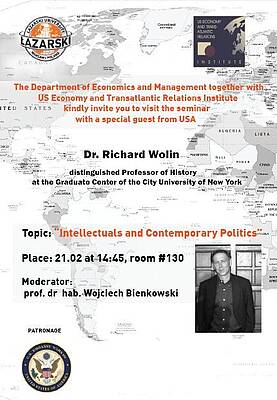 On March 10th, 2011, the Institute of American Economy and Transatlantic Relations together with the US Embassy in Warsaw organized a guest lecture by Dr. Richard Wolin on "Intellectuals and Contemporary Politics". educated individuals in shaping political discourse in Europe and North America.

Dr. Wolin is professor of history at the Graduate Center of the City University of New York, and has taught at Reed College, Rice University, and the University of Paris. He is the author of Heidegger's children: Hannah Arendt, Karl Löwith, Hans Jonas, Herbert Marcuse; Seduction into Irrationality: An Intellectual Romance with Fascism from Nietzsche to Postmodernism, and more recently, "The Wind From the East: French Intellectuals, the Cultural Revolution and the Legacy of the 1960s" (all published by Princeton University Press). Dr. Wolin writes frequently on political topics at the National, Dissent and New Republic levels. His books have been translated into ten languages. Previously, he lectured in Łódź, Kraków and Warsaw. 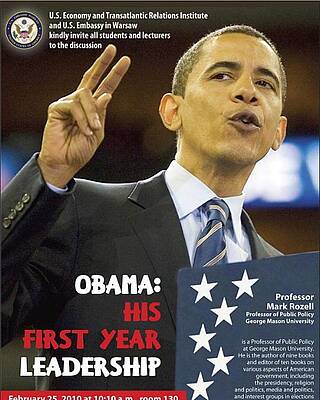 The Institute together with the US Embassy in Warsaw organized an open lecture by prof. Mark Rozell of George Mason University on the subject: President Obama: His first year. Professor Rozell authored numerous publications on US government policies, with particular emphasis on electoral politics, religion and the media. 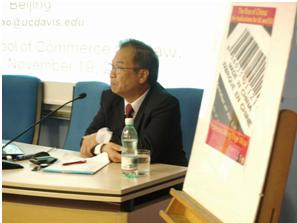 Economist Wing Thye Woo, a professor at the University of California Davis, specializing in East Asian economies, delivered a lecture at the University Lazarski titled: "The Rise of China: The Implications for U.S. and EU", on the impact of China's economic growth on the economy of Europe and the United States. The meeting was held on 20 November 2010.

Wing Thye Woo is a lecturer at the University of California Davis, is also a scholar at the Central School of Finance and Economics in Beijing, director of the East Asia in the Earth Institue at Columbia University, is also associated with the Brookings Institution as a nonresident Senior Fellow. Prof Woo led has taken part in many international research projects, one of which was headed by Leszek Balcerowicz, under the title "Economies in Transition: Comparing Asia and Europe" about the transformation of centrally planned economis. Prof Woo has also lead a project presented at the World Economic Forum in Davos, "Asia Competitiveness Report 1999", analyzing the Asian financial crisis Woo co-founded Asian Economic Panel Forum - 50 leading Asian economists. He has advised numerous governments: the Ministry of Finance of China, Ministry of the U.S. Treasury, the Prime Minister of Malaysia.